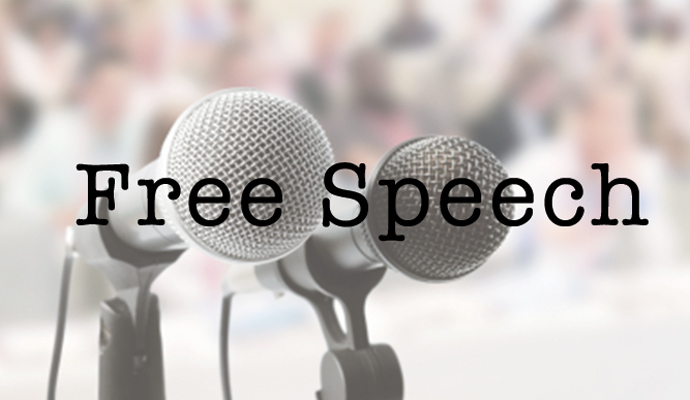 Much like a weekend in Vegas, your right to free speech under the First Amendment is both less and more than you might think it is. In this legal brief we talk about what is and is not free speech in the good ole U.S. of A.

For example, if you were in a crowded movie theater and yelled “fire”  (that’s a bad example nowadays – you’d be the only one running to the exit … ).

Ok, let’s start back in the olden days – even before I was born.  In the 1787 the Constitution came into being and a couple years later the Bill of Rights – the first ten amendments to the Constitution – were added to protect individuals and States from an overly powerful Federal Government.  The First Amendment says about free speech, “Congress shall make no law … abridging the freedom of speech … .”  and that’s about it. One short sentence.

That one short sentence is both narrower and broader than you may have imagined.  But most importantly it gave rise to this joke:  Why can’t Americans tell good knock-knock jokes?  Because freedom rings.  I love that for some reason.

First, what is not protected free speech?

The First Amendment only applies to laws – to local, state, and the Federal governments, and not to private parties – this is the most common confusion people have about free speech.  So, if for example you are on Facebook spreading fringe conspiracy theories like saying that President Obama was not born in America and, therefore, was not eligible to become President, you can be and people actually have been banned from Facebook for that.  And, apparently, some have not. But in either case, First Amendment protections do not apply to individuals or corporations – only to laws.

We often receive calls from people who’ve been fired from their jobs for something they said at work and they think that it violated their First Amendment rights – nope.  Sorry. That’s not a thing.

The 2nd large class of speech which is not protected as freedom of speech is known as “incitement” speech.  Incitements generally are words which are likely to provoke an immediate breach of the peace or breaking of law.  The typical analogy is shouting “fire” in a crowded theater from an opinion by Justice Oliver Wendell Holmes, Jr. Holmes was a Justice until 90 years old and wrote some beautiful opinions into his 80s so maybe there is some hope for our next President after all.

The other standard incitement cases are the “fighting words” cases where you insult someone or say something likely to start a fight, such as approaching a couple and you tell the guy you slept with his girlfriend last night.  That’s going to start a fight – unless the guy is her pimp, in which case he’s gonna just demand you pay him money.

So, your right to free speech is not limitless. BUT, on the other hand, it might be broader than you imagine.  That’s because “speech” is more than just the words that come out of your mouth.  Kids, if you are in middle or high school pay attention – this part is especially for you.

In 2003, a middle school student wore a t-shirt to school which had a picture of President Bush as a chicken and underneath the picture, the words “Chicken-Hawk-in-Chief.”  Best of all, next to the chicken-President there was a picture of lines of cocaine and a razor blade (cocaine was to President Bush what weed was to President Obama in case you don’t remember).  A teacher saw the t-shirt and asked the student to cover the cocaine part of it or turn the shirt  inside out.  When the young Political protester refused, the school sent him home.  The student sued and the case eventually wound up in the appellate court and the Court held two important things, (1) Freedom of Speech is more than just words but encompasses your choice of clothing and images; and, (2) As long as your “speech” or choice of images has any meaning other than being completely vulgar or offensive, the school or government cannot restrict what you wear or say.

If that conversation ever takes place, my job will be done here.

And 2nd, where you have almost any intention in your choices of imagery, art, etc. other than just to insult someone, that IS protected speech.  So if little Jenny can think of ANY reason for her weird offensive t-shirt that she likes to shock people with – she has protected speech.

And I hope you’ve enjoyed our brief foray into the First Amendment.  Only 27 more to go!