Legalese Explained. And How It Might Save President Trump. 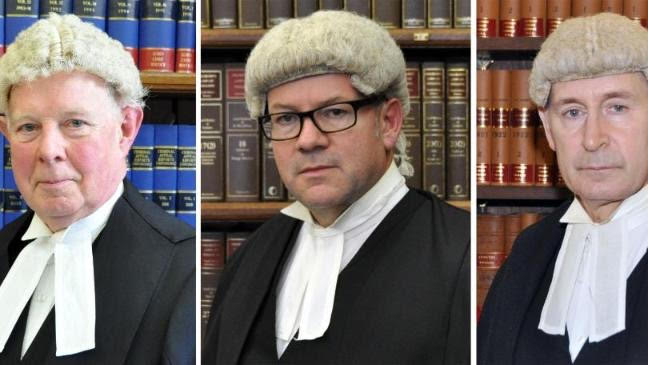 Today we pay tribute to Judges who have gotten a little creative in their opinions.

Most Judges – especially appellate Judges – are known to be pretty staid.  You typically think of them as dour old attorneys with little sense of humor.

Take for example the Judge in William T. Moore v. the State of Washington. In the Moore case an inmate filed a civil rights violation action against the State.  In fact, the inmate had filed numerous civil rights violation lawsuits against the State and was apparently spending his time in prison drafting strange and unusual lawsuits and motions. However, he took it a little too far in this case when he filed a Motion with the Court titled: “Motion to Kiss My Ass” in which his desired relief was to “Kiss my God (sic) Damn Ass Sorry Mother F-er You.

Even the cussing wasn’t grammatically correct.

The Judge, handed the potential for comedy gold in drafting his opinion, instead spent pages and pages to dryly recite the inmate’s abuse of process and then hit him with monetary sanctions before he could file any further lawsuits.  Boring.

BUT, let’s take a look at the a decision by Judge Kent in Bradshaw v. Unity Marine.  This was a fairly typical appellate issue as to what statute of limitations applied.   Apparently Judge Kent was not impressed by the substance of the lawyer briefings on the case. Or, as the Judge puts it:

“Both attorneys have obviously entered into a secret pact…to draft their pleadings entirely in crayon on the back sides of… place mats, in the hope that the Court would be so charmed by their child-like efforts that their utter dearth of legal authorities in their briefing would go unnoticed.”

Ouch.  Glad I wasn’t one of those attorneys!

And, in conclusion, Judge Kent says:

“… Having received no useful guidance whatever from either party, the Court has endeavored…out of its own sense of morbid curiosity, to resolve what it perceived to be the legal issue presented.”

Judge Kent, I hope your week got better from there.

But not all legal writing is that pissy, and my favorite example of nicer/happier legal writing  is an opinion written by appellate judge Gillis in Michigan.  The issue before Judge Gillis was whether the Plaintiff could sue a negligent driver for damage to his property – not his car, but damage to a tree that was on his property.  The trial court found that the Plaintiff could not sue due to the state’s no fault law.  Judge Gillis found as follows:

“We thought we would never see

A suit to compensate a tree

A suit whose claim in tort is prest

Upon a mangled trees behest

A tree whose battered trunk was prest

Against a Chevy’s crumpled crest

A tree that faces each new day

With bark and limb in disarray

A tree that may forever bear

A lasting need for tender care

Flora lovers though we three

We must uphold the Court’s decree.”

And there you have it – in almost perfect iambic pentameter.  Well done Judge Gillis.