How Long Can You Legally Stay At A Buffet?

Can You Sue God?

Jury Returns Verdict for Our Client! 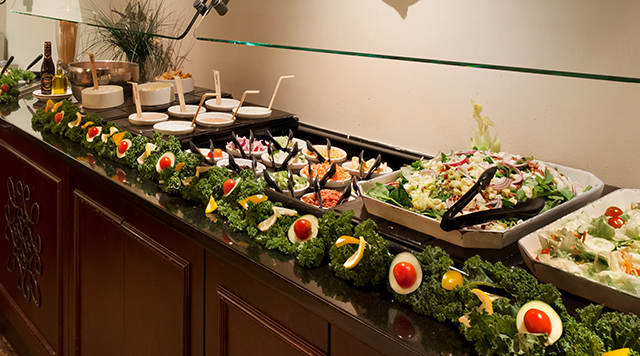 Admit it – you’ve thought of it.

Could you just stay all day at your local lunch and dinner buffet and eat all day long?

And a related question: Could a buffet kick someone out who was eating an abnormal amount of expensive food – say, crab legs?

I admit, it’s crossed my mind before – especially the poor law school student me.

Legally, your entry and payment for a buffet is an implied contract. An implied contract is where there are no written terms but both parties actions show the desire to enter into an agreement.

In our buffet situation, the restaurant lays out food in a buffet style and the patrons walk in ready to stuff their faces as much as possible – that’s an implied contract.

Most buffets will have posted notices about the “Rules of the Buffet” and you have to follow those. However, let’s assume for our hypothetical that there are no posted rules.

The first rule of implied contractual interpretation is that Courts will look at the context of the contract. Contracts happen between people – not in the vacuum of space. Meals are broken up into breakfast, lunch, dinner and most people go to a restaurant for one (and only one) of those meals.

So, in my opinion a Court would read into the implied contract a term limiting the buffet meal to one meal.

How about the 60 crab legs eater?

We don’t have to hypothesize for this one. There actually was a lawsuit on this very issue out of … guess where?

Las Vegas – home of the buffet. And the Court said the restaurant could not kick out a paying patron simply for eating too much. The risk of a big-eater was on the restaurant.

So, there you have it – you could probably not stay in a buffet restaurant all day but, on the plus side, they can’t kick you out just because you can eat a ton of food. So eat away!