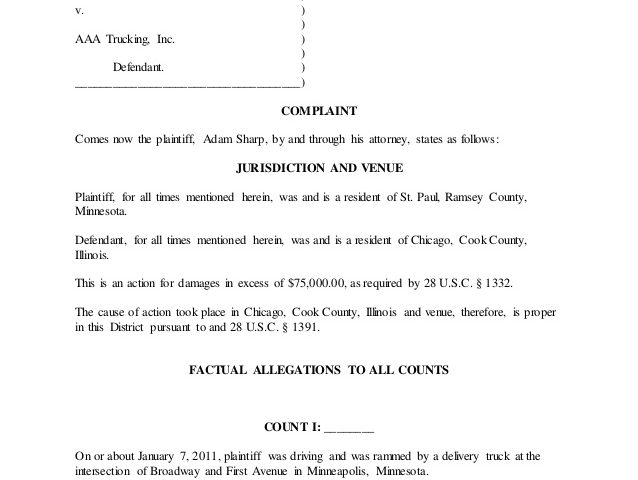 Okay, it’s time to sue your evil enemy – your nemesis.  Or perhaps you’re a young lawyer working on your first Complaint for an old grumpy law partner.  Today, I’m going to tell you how to draft a lawsuit – from Caption to Signature Line.

A lawsuit is made up of five parts: the Caption, Statement of Jurisdiction and Venue, the Body, and the Prayer for Relief and Signature Line.  In the next 5-6minutes or so we are gonna go through the important issues of each part and give you some samples.

The first part of the lawsuit is the Caption.  The Caption has the name of the Court at the top to say what Court the lawsuit is in.  Then, on the left side are the names of the Plaintiff and Defendants and on the right side is the Case number.  Of course, drafting the lawsuit you don’t have  a case number so just leave that blank.

The Caption is important for the party names.  You need to get the names correct.  Please make sure to get your own name right if you are the Plaintiff or your client’s name if you are a Lawyer – I’ve messed that up before … very embarrassing.  More difficult are companies and partnerships – very important – look up the names of companies and get the correct entity. For example, on Google, my law office shows up as “The Law Office of Hogan & Hogan” but if you put that in your caption as the Defendant, your lawsuit would fail because our legal corporate entity is “Hogan & Hogan, P.A.” and that’s what needs to be in the caption. That being said, please don’t sue me.

After the caption you put the name of the pleading – in this case it’s a Complaint.  The next sentence or two is introductory – you are telling the Court what the pleading is all about.  For a lawsuit you say “Plaintiff “Mr. Hell-Bringer” is suing “Defendant Loser-Corp” and these are the allegations. Simple and clean. Or you can get all fancy and say “Comes Now, Plaintiff, Mr. Hell-Bringer, and hereby sues Defendant Loser-Corp. and alleges as follows: …”

Jurisdiction is the power of the Court you are in to hear the case.  A Small Claims Court does not have jurisdiction to hear a large class action lawsuit – for example.  This is called subject matter jurisdiction and I can’t teach you a one year lawschool class in 30 seconds but…  I will try!

Federal Courts have jurisdiction to hear any case involving Federal law and any case where the parties are from different states and the lawsuit is for more than $75k.  State Courts are Courts of general jurisdiction over state laws – any state law and then small claims Courts for claims involving smalleramounts of money.  And there you have it – no need to spend a year in Civil Procedure class!

So, I can tell you that for what you are doing, if you are watching this video, stay away from Federal Court – you don’t want to be there unless you absolutely have to be – kinda like being alone downtown at 3 am.  So, file in State Court.  In State Court, the “amount in controversy is very important.  You have to tell the Court how much you are suing for so look the amounts up online and make sure if you are suing in small claims Court and Small claims is for cases under $10k, you have to say in your Complaint “ I am suing for under $10k.”

Next is allegations of Venue.  Venue is where you can sue – which Court. Generally, you can always sue where the accident happened, where the breach of contract occurred, or where whatever happened happened.  You can usually also sue where the Defendant resides.  So, for that reason, you have to allege the Parties – where they live or where the business is located.  And also you have to allege where the incident occurred.  This tells the Los Angeles Court – we are here in the Los Angeles (versus San Diego or Riverside County Courts) because the Evil Defendant stole my money here in Los Angeles.

So, now you have the proper Parties, you’ve told the Court why it can even have this case in front of it, it’s now time to actually get into your lawsuit.  Listen carefully: the purpose of a Lawsuit is to get you and keep you in Court – to not be dismissed.  Nothing more.  So keep it simple.  You are not making your entire case in the lawsuit itself.

Whatever your complaint is for – you will have to allege certain “elements” of the tort.  Let’s do a simple one: breach of contract.  Let’s say you give your drug dealer $100 for a bag of weed and he only gives you… nevermind, bad example.  Let’s say you pay your auto-shop guy $6k for new Dub spinner rims and he installs a cheap knockoff instead.  Breach of Contract has only 3 elements: (1) Existence of a Contract; (2) Breach of Contract; and (3) Damages.

Next element: “Defendant breached the contract by installing Generic Knock-off rims in place of the Dub Dazr rims agreed to.”

AND THAT’S IT.  You are going to want to add more stuff.  But don’t do it – only put what is needed.  Adding fluff is basically giving the Defendant free interrogatory answers – subjecting your client to questioning on it. Just allege enough to keep your lawsuit in front of the Judge.

One more example: you got a little drunk one night and … nevermind, bad example.  Ok, let’s say you broke up with your girlfriend and she went online and posted a bunch of stuff about your Auto-rim shop saying that you promise top quality rims and swap them out for cheap knockoffs.  You want to sue her for defamation.

The elements of Defamation are: (1) An intentionallyfalse statement; (2) Made to a third party; and (3) Which damages Defendant.  In some states you would want to add that the statement was made about your business.

So, that lawsuit looks like this: (1) On or about July 1, 2020 Defendant posted on her public Facebook page that Plaintiff “… promises his customer’s top quality rims and then swaps in cheap knockoff rims and never tells his customers.” (2) The post was public and had 24 views as of the drafting of this lawsuit. (3) The post was made about Defendant’s business and was made by Plaintiff with her knowledge that it was false.

And that’s all you need to allege.  That’s it.  Just find out what the minimum requirements are and make sure to meet them.

And finally, that brings us to Damages and Prayers for Relief. Very important so don’t gloss over it.

Then you need a Prayer for Relief.  This is not a prayer you make on Sunday at church or when you get home drunk, late, and your parents are still awake.  This is a request for relief – for damages.  Again, there are entire books written on this subject and I can’t tell you everything in 30 seconds.  But I will try!

There are basically two types of “relief” in a lawsuit: (1) Monetary or (2) Injunctive.  You are asking the Court to either money or to force the Defendant to do or stop doing something.  Sometimes both. For money damages: You can ask for compensatory and punitive.  But, you can only ask for punitive damages in certain situations.  But HERE’S the key:  If you don’t ask for it, you will never get it.  So when in doubt, pray it out (I made that up).  Just ask for it.  The Judge can only say “no.” Seriously, being a lawyer gets you used to rejection – I’m rejected every day.

So, if you are not a lawyer, try not to get too technical in your Prayer.  Just tell the Court what you want it to do.

Eg. Plaintiff prays for relief as follows: (1) An Order requiring Defendant to remove the defamatory Facebook post; (2) For monetary damages in the amount of $5,000.00.

If you don’t ask for it, the Judge can’t grant it.

And then, finally, that brings us to the end.  At the end of your lawsuit you have to ask for a Jury Trial if that is what you want.  Don’t waive that by forgetting!  And then you do NOT need a certificate of service because you don’t have anyone to serve.  So you end with your signature line which needs to have all your correct and current information so the Court knows how to contact you.

AND THAT’S IT.  The basics of filing a lawsuit – caption, jurisdiction, venue, elements, damages.  I think this is my longest video to date.  If you have a legal subject you’d like me to cover in under 10 minutes, let me know in the comments below