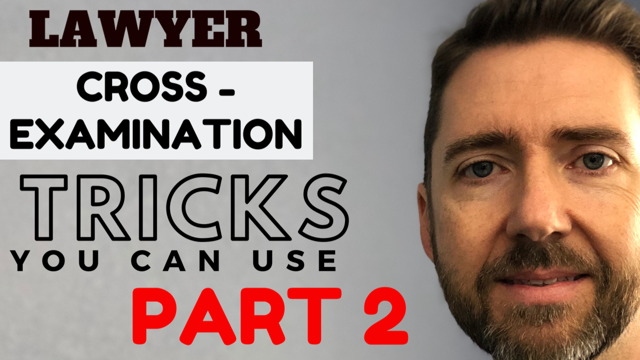 Previously, we did a video and blog on cross-examination techniques you can use in your life, and now, by popular demand, we bring you Lawyer Cross-Examination Techniques You Can Use – Part Two!

To see the Part I: https://www.hoganlegal.com/news/lawyer-cross-examination-tricks-and-techniques-you-can-use/

Last year we covered 3 cross-examination techniques that you can actually use in your life – (1) the “Obvious Yes” technique; (2) the “Uncomfortable Silence” technique, and the “Analogy” technique.

Today we are going to present two new techniques that lawyers use that might be useful for you in everyday life.

The first technique today I call the “Build the Train” technique.  When you ask a question – the idea here is to ask short one-fact questions instead of one long multi-faceted question.  This does a couple things – first it highlights the area of contention, it doesn’t give the witness any wiggle room in their answer, and it allows for easy follow-up questioning as to each fact.  Asking one fact at a time is the key and then I like to build on every answer to each individual fact to build up to the longer incriminating statement.

Here’s what happens if you lump facts together in a question during cross examination. Let’s use a hypothetical divorce case in which we are cross-examining the husband about his late night activities.  This is what NOT to do:

Q: Isn’t it true Mr. Johnson that you often called and spoke with Ms. Smith late at night, from your work cell phone, many times while Mrs. Johnson was sleeping in the other bedroom?

A:  Well, no, that’s actually not correct.

That question and answer is a disaster – how does anyone know which fact he disagrees?  Where is the drama?  How are you highlighting this despicable behavior?  So it’s vital to ask every fact by itself for effective cross and build your train to finally arrive at the above question. That question actually had like 4 facts in it so here is each fact asked by itself:

A: Yes, you can say it was late usually.

Q:  Well, would you agree that most people would consider after 10 pm late at night?

Q: And you called her late at night, not from your personal cellphone, but from your work phone right?

Q: And when you called Ms. Smith late at night your wife was usually asleep in the bedroom right?

A:  No, I believe she was sleeping on the couch by then.

Q:  Okay, the couch. So, you would often call Ms. Smith late at night, from your work cellphone, while your wife was asleep in the living room, isn’t that correct Mr. Johnson?

By focusing on each individual fact, getting witness agreement each step on the way, and building the train to the final question you’ve  done a much better job at highlighting the incriminating testimony.  In the same way, when you are in an argument, or in a meeting, and trying to make a point, focus on one fact at a time – you have to build the train before you can ride it.  One fact at a time.

Moving on, the second technique we are going to look at is the “Nails in the Coffin” technique This technique involves impeaching a witness with a document.  In your regular life, this might be your boyfriend’s incriminating text message or at work it might be a document which contradicts your work-enemies position on a new business model.  But whatever it is, you have a document which is bad for the other side.

In law school, you are generally taught to show the document to the witness, authenticate it and THEN cross examine them about it.  Wrong wrong wrong.

Instead you are going put the nails in the coffin before burying your witness.  Let’s stay with our example of the cheating husband and say he denies spending marital assets on his girlfriend until after he had moved out of the home.  But you have a receipt for a diamond bracelet dated before he moved out of the house and which you know he eventually gave to the girlfriend.  You bury him by asking all around the receipt – one nail at a time- before showing it to him. Something like this:

Q: In the month before you moved out, things were not good between you and your wife  – is that fair to say?

Q: And in that month, you knew you would be separating – I mean you had already signed a lease on a new apartment right?  A:  Yes, I ..I wanted to move out.  Q: So you weren’t trying to reconcile with your wife right?  A:  I wasn’t trying to get back with her, no.  Q:  IN fact, in that month you were beginning to have strong feelings for Ms. Smith right?  A: I don’t know if that’s what I would say but we were getting close.  Q:  So in the month before you moved out you wouldn’t have bought your wife an expensive present right?  That would make no sense would it?  A:  I don’t recall but no it wouldn’t have made sense.

Q: You previously swore under oath that you never spent money from the joint bank account for Ms. Smith, correct?

Q: And while you were living in the home, before you moved out, you said you had not opened a separate account – is that true?

Q:  And you didn’t spend money on Ms. Smith from the joint account because you felt that would be improper, right?

Q: It was an account that your wife and you shared – she put her earnings in the account also right?

Q:  In fact, if you had bought Ms. Smith a present using funds from that account you would in effect have been buying her a present using your wife’s money – is that accurate?

A:  Yes, Well, it was my money also even though it was a joint account.

Mr. Johnson, I’d like to show you a receipt from that month before you moved out …

So, instead of just showing him the receipt first, you spend a couple minutes putting the nails in the coffin, limiting his wiggle room as much as possible to make him look as bad as you can when you get the document in front of him.

And there you have it, the “Build the Train” technique – fact by fact, and the “Nails in the Coffin” technique.  I hope you might find these techniques useful in your life.