Lawyer Cross-Examination Tricks & Techniques You Can Use Anywhere

What Can You Legally Take From Your Hotel Room? 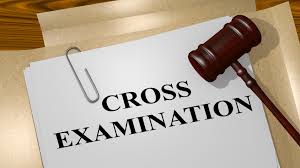 Us lawyers use a lot of techniques at deposition, a cross-examination to get opposing parties to say things that will help our case.  Here are some that you can use in your everyday arguing.

The first technique is what I call the “obvious yes” technique and that is where you ask a series of general questions where the answer is obviously “yes,” leading to a question where a jury infers another “yes” is the correct answer, even though the person you are examining does not want to answer “yes.”

For example, in a car accident case, let’s say I want the person to admit to me that driving with one hand on the steering wheel is dangerous (because that is what he was doing when the accident happened).  If I just asked him “isn’t it dangerous to drive with only one hand on the wheel he would simply say “no, I drive like that all the time.”

So instead, I would ask very general questions about driving and safety that are obviously true – with the idea that I will eventually ask the final question “Wouldn’t it have been safer if you had been driving with two hands?”

By way of example:

Q: You think it’s important to drive safely don’t you?

Q:  You would agree with me that you need to be aware of your car and other cars on the road while driving?

Q:  It’s important to maintain a safe speed while driving?

Q: While driving, you would want to do everything you could in order to keep yourself, your passengers and other people on road safe, right?

Q:  So wouldn’t you then agree with me that it would have been better that day if you had been driving with two hands on the steering wheel?

Now, here the witness can say “no” to the final question but by this point the answer “yes” is the better answer.  And if the witness answers any of the “obvious yes” questions “No,” well, then he or she comes across as uncaring, strange, or maybe evasive.  It’s a win-win situation for the questioner.

People tend to be uncomfortable with silence.  When you are trying to extract information from a quiet or unwilling witness – I employ the silence technique.

This technique simple involves asking a question and then, even after the witness answers, not asking another question but waiting – causing an uncomfortable silence.  You may be surprised that people will continue to talk – to fill the silence.  And you me be surprised what you will learn – sometimes its the additional information that’s the most important.

Q:  At the time of the accident, why were you driving with one hand?

A:  I don’t really remember.

A: I mean, around that time my right arm was bugging me a little so maybe I was trying to use it less … could’ve been that.

So, now the witness has just disclosed something you might have never known – the driver thinks he had a right arm problem and was driving one-handed because of it.  This is great information to use at closing argument – to argue he was driving impaired.

The last technique is what I call “The Analogy” and it is simply a way to get a person to agree with you in one context and then switch it on them into the context of your case.

Q: Ma’am, have you ever shot a gun before?

A: I’ve shot a handgun and rifles before.

Q: In your experience is it possible to shoot a handgun with one hand – like in the movies?

Q: Did you ever fire the handgun with one hand like in the movies?

A: I might have tried but I would normally use two hands.

Q: Are you more accurate with two hands?

Q:  Are you less likely to drop the gun if you are using two hands?

Now, it’s not always that easy to get there, sometimes they will fight you, but if you start with an analogy that cannot really be argued against (it’s safer to use two hands to fire a gun) then you can generally get them there.  And once they admit that, you have them locked them in for the killer question which is, “Don’t you think when driving a 2 ton car at 65 mph it would have been safer if you used two hands?”

And there you have it – three cross-examination techniques you might be able to use in your everyday life.