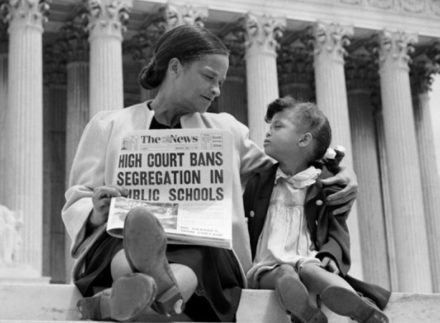 I am so happy to have my father, retired lawyer, Jerry Hogan, write this blog as he remembers his own personal experiences of two important civil rights cases: Plessy v. Ferguson and Brown v. Board of Education.

When I was a boy of 8 or 9 in 1952, my mother took me to the movies in downtown Indianapolis, Indiana. The theater only permitted “colored” people to sit in the balcony separate from the white people down stairs. There was a “colored” only bathroom and a “colored” only water fountain.

As a child I never asked my mom about racial discrimination. It was just “the way it is.”

In my case, Black people were not denied access to a public accommodation, the theater, but they were separated from whites. It was supposed to be separate, but equal.

The separate but equal legal doctrine came from the 1896 Supreme Court case of Plessey v. Ferguson. It held that separate school for Black kids was constitutional so long as the schools cost the same to build, had equal libraries, sports facilities, etc.

In 1954, the separate but equal doctrine was overturned by the Supreme Court in Brown v. The Board of Education. There the court held that separate by definition is not equal.

There was tremendous resistance to school integration asmandated by the Brown case. Fifteen to twenty years later, the Supreme Court was still deciding case after case challenging the ruling.

In 1968, I was a school teacher and coach in a predominately Black high school in Dayton, Ohio. One of the Brown case issues that the Supreme Court decided was that equality also required teaching staffs to be integrated. Consequently, a large percentage of our Black teachers were transferred to white schools and white teachers were transferred to our school. Many of the white teachers did not want to teach in a Black school because they thought that Black kids were inferior students. In this particular instance, I felt that my kids would have been better off if the Black teachers had been allowed to stay because they wanted our kids to succeed.

As times goes by, we tend to forget about how important civil rights cases have influenced our lives. This morning, as I prepared to write this blog, my 30-year-old daughter saw the 1967 Loving v. Virgina Supreme Court case in my notes. She said, “Are you kidding! Were there laws that made interracial marriage illegal?” Yes, until 1967.

Brown v. The Board of Education is 66 years old. It was decided on my 11th birthday. Many of of you have never have heard of Brown. You weren’t there to witness the struggles of Martin Luther King, Thurgood Marshall, and thousands of others in the fight for civil rights.

We must continue to celebrate the Brown case, the Loving case, voting rights cases, fair housing cases, affirmative action cases, and others, that have affected all of our lives and some of which we are not aware existed.