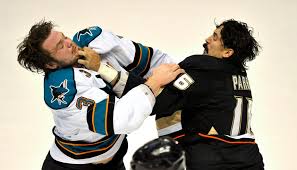 Back in 2013, Kanye West got mad at a paparazzi guy and grabbed the camera out of the guys hand and was charged with assault and battery.  Last week, I watched 22 grown men try to knock each other’s heads off on a football field – not one arrest or lawsuit.

What’s up with that?

Ordinarily, when people punch, hit or elbow others, it is criminal, or at least the basis for a civil lawsuit. In the sports context, however, neither prosecutions nor lawsuits generally result from this behavior.

Legally, battery is the willful and unlawful touching of another. Period.  And in that context, if you watched football over the weekend you witnessed over a thousand criminal acts of battery.

However, consent to the touching is a complete defense to battery which means that if an athlete consents to the use of force, then there is no crime.  In the civil law world this is also called “assumption of the risk” – meaning you voluntarily assumed the risk of injury and therefore can’t sue if you get hurt.

When someone agrees to play a sport, they effectively consent to physical contact consistent with the understood rules of the game. By stepping onto the field of play, athletes assume the risk inherent in the activity.

The ultimate question, “Is punching or spitting or low hits trying to break an opponents leg one of the inherent risks of the sport, which should be punished within the rules of the game, but not in the criminal or civil courts?”

Not surprisingly, arrests for sports-related violence are extremely rare.  The most brutal and infamous punch in basketball history resulted in no criminal charges at all. During a game in 1977, Los Angeles Laker forward Kermit Washington delivered a near-fatal punch to Houston Rocket forward Rudy Tomjanovich during a fight that broke out during a game. The blow resulted in a fractured skull, broken jaw and nose, and leakage of spinal fluid, which almost killed Tomjanovich.  The puncher Kermit Washington was suspended by the NBA but was not arrested or charged criminally.

Violence during games has led to charges on occasion. In 1988, Dino Ciccarelli became the first National Hockey League player to receive jail time for hitting another player with his hockey stick. Boston Bruins defenseman Marty McSorley was charged in 2000 with assault with a weapon for his actions during a game. In baseball, Jose Offerman was sued in 2009 for hitting two players with a bat in a minor league game.

Violence with charges is usually especially and obviously egregious or outside of the run of play – for example, a sucker punch after the play is dead.  But punches and kicks during the run of play are generally not made a big deal of even though you’d be arrested if you did the same thing to the same person in the parking lot that you just did on the field.

Some Courts have tried to address this discrepancy in how the law is applied by opining that every sport has its official “rules of the game” and ALSO its unofficial rules.  For example, hockey rules don’t allow you to punch the other player in the face but everyone knows that when two players square off, punches are coming, and no one stops it.  Some level of pushing and hitting are expected in football “unofficially” even if its not allowed officially.

Which brings us to the recent incident involving Cleveland Browns star Myles Garrett where he tore off Pittsburgh Steelers’ Mason Rudolph’s helmet, then hit Rudolph’s head with it in a fit of rage.  In football, this level of violence not completely outside the realm of foreseeability and, therefore, I would suggest that police will stay on the sidelines on this one.  If Garrett were a star volleyball player, I would be more worried for him.