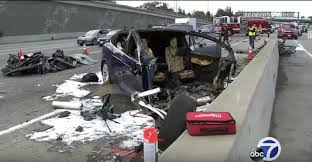 Tesla was recently sued by the family of a man who died when the Tesla’s autopilot failed to avoid a truck that ran a red light.  This is an important harbinger of things to come.

When a person doesn’t pay attention and rear-ends you from behind, you might sue him for negligence.  You come to me, we make the claim against the other driver – and then the person’s insurance company (if you hired me) pays you a boatload of money. It’s relatively straight-forward.

However, what we are beginning to see, and what will become more and more common in the future, are lawsuits against car manufacturers and GPS guidance systems for accidents caused not by failure of a person to control their vehicle but a failure of technology.

A Little Bit of History

The ability to even sue manufacturers of automobiles like Tesla actually starts with a case from back in 1916 – Macpherson v. Buick.  The opinion was written by Judge Cordoza (mention Cordoza to a law school professor and watch him squeal with excitement – professors loooove Cordoza).

In any case, coming back to Tesla – we have now seen a handful of these lawsuits for manufacturing a defective product against Tesla.  In a recent case, Banner v. Tesla, Mr. Banner had the Tesla’s autopilot engaged and it unfortunately failed to take any evasive action when a large truck ran a stop sign.  Mr. Banner was unfortunately killed in the accident.

The Banner lawsuit does not include a count against Tesla for selling a defective product.  Over the coming years we are going to see the number of these lawsuits explode as people rely more and more on cars to drive themselves.

The Future of Car Accident Cases

This will be a large shift in accident litigation.  Imagine the situation where a driver has auto-pilot engaged and it messes up and runs him into another car.  Normally the not-at-fault driver sues the at-fault driver  for his damages.

In this new era though, you are going to have BOTH the at-fault driver AND the other driver both brings claims against the vehicle manufacturer for making and selling a defective product.  And why wouldn’t that happen?  Certainly Tesla or Ford are better insured and have deeper pockets than any individual.

To prove a products liability case you must prove that

In the Banner case Tesla will argue that its auto-pilot system was not intended to be a set and forget system.  The driver is supposed to be aware and able to take control of the vehicle at anytime.  Mr. Banner’s estate will argue that Tesla and its sales staff tout how safe and efficient the system is and tell you with a wink and a nod that you can turn on auto-pilot and take a nap.

However, the case plays out, we are entering a new era in car accident cases where we will be looking at not only the negligence of drivers but also the technology behind the drivers.