Theme Park Wristbands … What Secrets Do They Hold?

How Can Fortnite, Facebook and Other Online Activities Destroy Your Personal Injury Case?

Can I Collect Workers’ Compensation as a Volunteer? 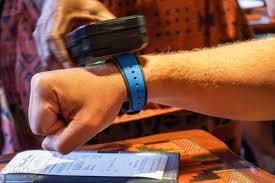 I’m going to give you five words: “Theme parks”, “rides”, “injuries”, and “lawsuit”.  Now, I want you to think of a short scenario involving these five words.  Ready?  Go!

Considering the website that you’re on, I’m going take a gander that your story involves a person suing a theme park because he or she was injured while on a ride?  Maybe you know such a person.  Maybe it has happened to you.  My first thought was the same as yours.  My second, a more creative attempt, involves an epic love story in a galaxy far far away and ultimately ends up with … a person injured at a theme park.  I pretty much gave up after that.

A few weeks ago, while wasting my youth away in a cattle call at the local Court House, I heard an interesting discussion.  A “cattle call” for those not in the know is what we call a judicial hearing where you show up to the Court House at an assigned time and the Court will get to you when they get to you.  In the interim, all the attorneys sit in the hallway or in the Courtroom waiting to be called on … like cattle.

I hear all sorts of interesting things at these cattle calls.  Everyone seems to know each other and most speak freely about anything and everything under the sun.  A fly on the wall Attorney can learn more during these waits than anything learned during did in law school.

A defense attorney (an attorney who mostly works on behalf of insurance companies) was telling anyone willing to listen, how much of a genius he was.  This attorney represented a Defendant in a car accident case.  Both sides took the case deep into litigation.  In the face of overwhelming evidence of injuries and damages presented by the Plaintiff, this particular defense attorney allegedly turned the situation around so brilliantly that it resulted in a settlement substantially less than what was anticipated.

The Plaintiff in this particular case claimed that he was so severely injured that he could barely function in his everyday life.  In Personal Injury, we call this type of damage “Duties under Duress” meaning that the Plaintiff’s normal everyday duties such as cooking, cleaning, etc. has been made so difficult by the injuries from the accident, that his or her quality of life has been substantially and negatively affected.

Deep into litigation and after multiple attempts at settlements, both sides were gearing up for trial.  One where the Plaintiff was expected to put in front of the jury a substantial monetary amount in damages.  By chance, while reviewing his deposition transcript of the Plaintiff, the Defense attorney noticed a penchant for visiting theme parks.  One local theme park, who shall not be named, was in the habit of providing colorful digital wristbands to its customers to keep track of park activities, reserve ride times, pay for park swags, etc. The Plaintiff happened to have one of these.

The Defense attorney sent a subpoena for documents to this particular theme park for all records related to the Plaintiff’s theme park activities within the period of time where the Plaintiff claimed he was injured.  What he got back was a lot more than expected.  Hundreds upon hundreds of pictures of the Plaintiff riding roller coasters were produced along with detailed attendance records of multiple visits per month.  This guy really liked theme parks.

Do you remember those overpriced pictures during roller coasters where people raised their arms and make weird faces right before the big drop? Guess what? They’re all recoreded by the theme park and they’re all discoverable during the course of litigation.  With a corresponding wrist band it is quite simple to locate and produce them.   It became difficult for the Plaintiff to claim that he can barely vacuum the floor without difficulty when there were multiple pictures of him smiling and doing bunny ears right before a 50 foot drop.

From what this Attorney told us, the Plaintiff ended up accepting substantially less when confronted with the pictures.  Now was the Plaintiff really injured as much as he claimed?  Who knows.  Could he still have received what he asked for at trial?  Maybe.  But the Plaintiff never got the chance to present his case because the rug was suddenly pulled from underneath him.  A picture is worth a thousand words and the Plaintiff made the decision not to take the risk at trial.

We’ve touched upon this in our previous article about the harms of posting on social media.  In this digital age of ones and zeroes, every little discrepancy or contradiction can be used against you during the course of litigation.  A good personal injury attorney can assist you in presenting your case in the best possible light while working with you to mitigate any potential damage that comes unexpected situation like this.  It is the Defense’s job to make mountains out of a molehill and it is up to us Plaintiff lawyers to navigate through all the smoke and mirrors and redirect the Jury to the heart of the matter.

Here at Hogan & Hogan, we make it our mission to drag the practice of law kicking and screaming into the 21st century and that involves being mindful of every possible new challenges introduced by technology that lay ahead and advising our clients accordingly.

Attorney Baolinh Than is an Associate Attorney with Hogan & Hogan's Personal Injury Department.